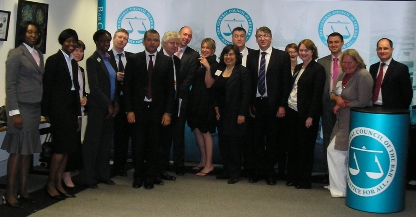 FOR IMMEDIATE RELEASE: FRIDAY 8 MAY 2009

Greater co-operation between employed and self-employed barristers in difficult economic circumstances, including an increase in the number of barristers trained by commercial bodies, has been urged by the Chairman of the Bar, Desmond Browne QC.

Speaking at a joint Bar Council/Bar Association for Commerce, Finance and Industry (BACFI) reception on 7th May, he told an audience from a wide variety of backgrounds:

‘As financial pressures mount, we must work more closely together on matters of mutual interest – particularly if the traffic between the employed and self-employed Bar is set to increase.’ He thanked those many BACFI members who were also loyal consumers of the advocacy and advisory services of the self-employed Bar.

BACFI represents the interests of employed barristers providing legal services in a commercial environment and also "non-practising" barristers – those Bar Council subscribers qualified as barristers who do not practice as such.

And he called for a greater number of barristers to be trained in the private sector, through the increased provision of pupillages in commerce and industry. Rules should be simplified to allow this, he said.

‘Many are the times I have heard it said that the process of approving organisations as Pupillage Training Organisations is too bureaucratic and that commercial bodies prefer to take trainee solicitors, rather than pupil barristers.

‘I hope that the Bar Standards Board, which regulates Pupillage Training Organisations, will look at whether there are unnecessary obstacles as part of its current review of pupillage,’ he said.

BACFI’s members also include self-employed barristers, students, overseas lawyers working in the UK and retired barristers. It was founded in 1965 and since then has helped to promote the interests of employed barristers within the profession. The Association is independent of the Bar Standards Board and the Bar Council, although it works closely with both organisations on matters affecting members.

‘BACFI and the Bar Council have much to learn from each other. The commercial sector is experiencing unprecedented turbulence, and we can provide coal-face insights to the wider Bar on what is happening in a dramatically changing world.

‘At same time, many BACFI members will be looking to the expert legal counsel and advocacy services of the self-employed Bar to help us all to navigate the choppy waters ahead. ‘Together we are stronger, and better placed to serve the public interest and those of the organisations in which we serve. The now-enduring commitment of successive Bar Chairmen to the mutual respect of both wings of the profession is to be welcomed, and I am proud that the BACFI “brand” and that of employed barristers is now stronger than it has ever been.’

Desmond Browne had earlier told the reception that independence was the hallmark of every barrister, employed or self-employed.

‘Nowhere is independence more important than in employed practice, where pressures exist, which put barristers to no less challenging tests than anything confronted by the self-employed.’

The Bar Council existed to vindicate that independence, he said.

2. Christiane Valansot is Chairman of BACFI (Bar Association for Commerce, Finance and Industry) and General Counsel to the Investment Management Association, the trade association for fund managers. An investment banking veteran, she has worked at Banque Paribas, Credit Suisse First Boston and latterly at Swiss Re Financial Products and as Head of Legal (Europe and Asia) for FPK. She was called to the Bar in 1989 (Middle Temple) and after an associateship at Sullivan and Cromwell in New York, completed pupillage at 2 Crown Office Row and 4-5 Gray’s Inn Square. Christiane has also worked as a banking litigator at solicitors Wilde Sapte.

3. BACFI’s Professional Issues sub-committee plays an active role influencing developments which affect employed barristers. A member of the Committee has been appointed to the Qualifications Committee of the Bar Standards Board. Current issues for BACFI include the Review of Pupillage, the Second Consultation of Alternative Business Structures, the Bar Vocational Course and the final Neuberger report. BACFI also has members on the Professional Conduct and Employed Bar Committees of the Bar Council.

4. BACFI also focuses on professional development and career opportunities for members. To support these objectives, BACFI hosts a programme of seminars and other events throughout the year. Each provides an excellent opportunity for networking. Membership is open to all barristers and student members of the Inns of Court.